ONLINE - Racism in Policing on Campuses 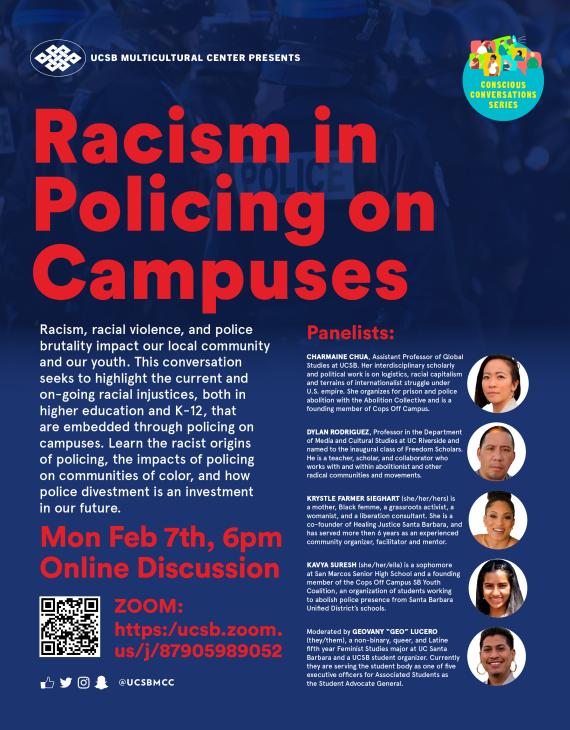 Racism, racial violence, and police brutality impact our local community and our youth. This conversation seeks to highlight the current and on-going racial injustices, both in higher education and K-12, that are embedded through policing on campuses. Learn the racist origins of policing, the impacts of policing on communities of color, and how police divestment is an investment in our future.

Panelists consist of Charmain Chua, an Assistant Professor of Global Studies at UCSB and is a founding member of Cops off Campus, Dylan Rodriguez, a Professor in the Department of Media and Cultural Studies at UCR and was named to the inaugural class of Freedom Scholars, Krystle Farmer, a co-founder of Healing Justice Santa Barbara, Kavya Suresh, a sophomore at San Marcos Senior High School and a founding member of the Cops Off Campus SB Youth Coalition, and moderated by Geovany “Geo” Lucero, a UCSB student organizer and this year’s A.S.  Student Advocate General.

Panelist Charmaine Chua is Assistant Professor of Global Studies at the University of California, Santa Barbara. Her interdisciplinary scholarly and political work is on logistics, racial capitalism and terrains of internationalist struggle under U.S. empire. Her work has been published in The Boston Review, The Nation, Theory and Event, and Antipode, among other venues. She organizes for prison and police abolition with the Abolition Collective and is a founding member of Cops Off Campus.

Panelist Prof. Dylan Rodriguez is a teacher, scholar, and collaborator who works with and within abolitionist and other radical communities and movements. Since 2001, he has maintained a day job as a Professor at the University of California, Riverside. His peers elected him President of the American Studies Association for 2020-2021, and in 2020 he was named to the inaugural class of Freedom Scholars. Dylan is the author of three books, most recently White Reconstruction: Domestic Warfare and the Logic of Racial Genocide (Fordham University Press, 2021). He has participated in dozens of podcasts, live interviews, experimental media projects, and livestreams and loves being invited to join form of collective study, thought, and planning that build capacity to survive and revolt against oppressive conditions.

Panelist Krystle Farmer Sieghart (she/her/her) is a mother, Black femme, a grassroots activist, a womanist, and a liberation consultant. Krystle has served more then 6 years as an experienced community organizer, facilitator and mentor, with a demonstrated history of working in higher education, underserved communities, and the non-profit industry. Krystle is skilled in public speaking, social media, teaching, social justice advocacy, cultural competency, Diversity, Equity and Inclusion, and community outreach. She is a strong community and social services professional, currently holding a Bachelor of Science – B.S. in Organizational Leadership from Los Angeles Pacific University. Krystle is a co-founder of Healing Justice Santa Barbara and has several years of experience creating youth-centered curriculum.

Panelist Kavya Suresh (she/her/ella) is a sophomore at San Marcos Senior High School and a founding member of the Cops Off Campus SB Youth Coalition, an organization of students working to abolish police presence from Santa Barbara Unified District’s schools. Kavya is passionate about using her platforms to promote a reimagined definition of safety that utilizes community healing, education policy reform, and restorative justice as mechanisms to combat violence and discrimination on campuses. As an Indian American student and a daughter of two immigrants, her unique intersectional experience in the education system inspires her activism to create more equitable, safe, and nurturing learning environments for marginalized youth.

Moderator Geo Lucero (they/them) is a non-binary, queer, and Latine fifth year Feminist Studies major at UC Santa Barbara. They have been involved in various aspects of campus life and advocacy throughout their time at UCSB such as with A.S. Trans & Queer Commission, MCC Council and Hermanas Unidas. Currently they are serving the student body as one of five executive officers for Associated Students as the Student Advocate General. They further represent their peers as the MCC’s Communication liaison. They hope to work towards a positive and equitable livelihood for all.